The simplest way to add Google OAuth authentication ("Sign in with Google") to your Elixir/Phoenix app.

Based on the "Authentication" category

Do you think we are missing an alternative of elixir_auth_google or a related project?

The easiest way to add Google OAuth authentication to your Elixir Apps.

We needed a much simpler and extensively documented way to add "Sign-in with Google" capability to our Elixir App(s).

An Elixir package that seamlessly handles Google OAuth2 Authentication/Authorization in as few steps as possible. Following best practices for security & privacy and avoiding complexity by having sensible defaults for all settings.

We built a lightweight solution that only does one thing and is easy for complete beginners to understand/use. There were already several available options for adding Google Auth to apps on hex.pm/packages?search=google that all added far too many implementation steps (complexity) and had incomplete docs (@doc false) and tests. e.g: github.com/googleapis/elixir-google-api which is a "generated" client and is considered "experimental". We have drawn inspiration from several sources including code from other programming languages to build this package. This result is much simpler than anything else and has both step-by-step instructions and a complete working example App including how to encrypt tokens for secure storage to help you ship your app fast.

This module is for people building apps using Elixir/Phoenix who want to ship the "Sign-in with Google" feature faster and more maintainably.

It's targetted at complete beginners with no prior experience/knowledge of auth "schemes" or "strategies". Just follow the detailed instructions and you'll be up-and running in 5 minutes.

You can add Google Authentication to your Elixir App using elixir_auth_google in under 5 minutes by following these 5 easy steps:

Open your project's mix.exs file and locate the deps (dependencies) section. Add a line for :elixir_auth_google in the deps list:

Once you have added the line to your mix.exs, remember to run the mix deps.get command in your terminal to download the dependencies.

Create a Google Application if you don't already have one, generate the OAuth2 Credentials for the application and save the credentials as environment variables accessible by your app.

Note: There are a few steps for creating a set of Google APIs credentials, so if you don't already have a Google App, we created the following step-by-step guide to make it quick and relatively painless: create-google-app-guide.md Don't be intimidated by all the buzz-words; it's quite straightforward. And if you get stuck, ask for help!

By the end of this step you should have these two environment variables set:

3. Create a GoogleAuthController in your Project 📝

This code does 3 things:

Open your router.ex file and locate the section that looks like scope "/", AppWeb do

5. Add the "Login with Google" Button to your Template ✨

In order to display the "Sign-in with Google" button in the UI, we need to generate the URL for the button in the relevant controller, and pass it to the template.

Open the lib/app_web/controllers/page_controller.ex file and update the index function:

Open the /lib/app_web/templates/page/index.html.eex file and type the following code:

The home page of the app now has a big "Sign in with Google" button: 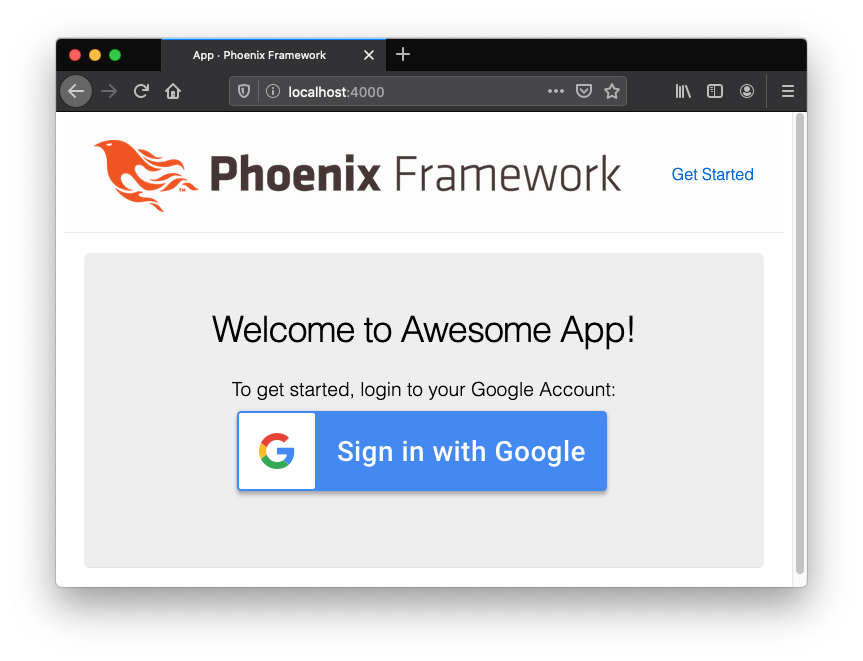 When the person clicks the button, and authenticates with their Google Account, they will be returned to your App where you can display a "login success" message: 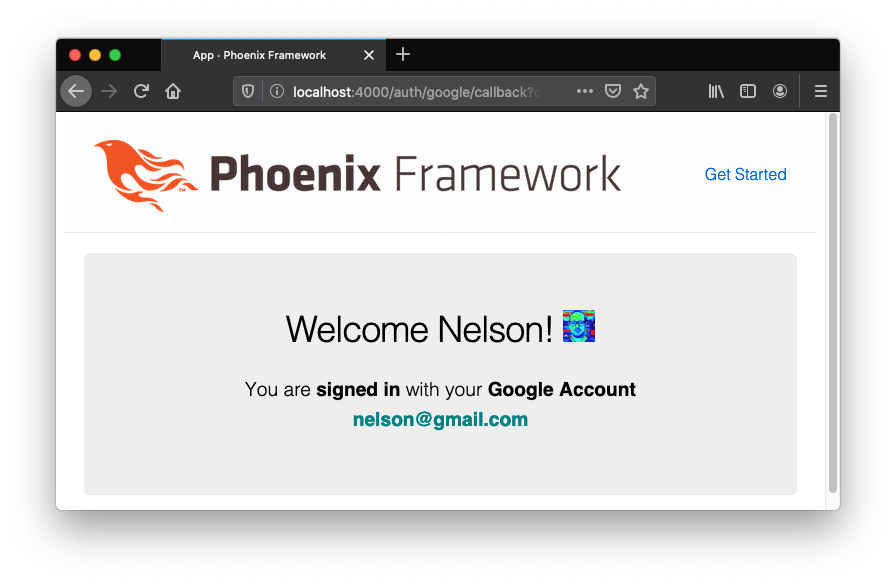 In step 5.1 above, we suggest using an <img> for the Sign in with GitHub button. 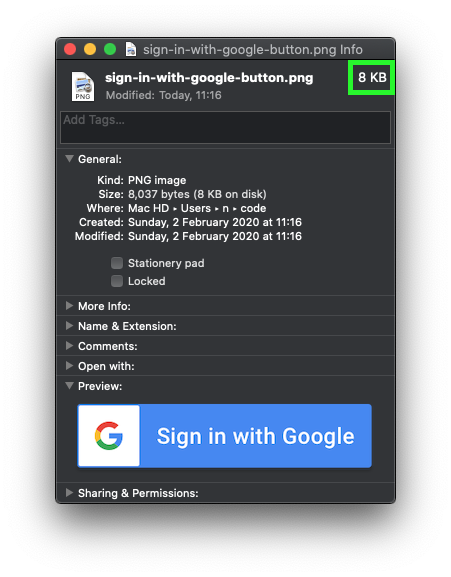 We could spend some time in a graphics editor optimising the image, but we know we can do better by using our CSS skills! 💡

The following code re-creates the <img> using the GitHub logo SVG and CSS for layout/style:

We created this from scratch using the SVG of the Google logo and some basic CSS. For the "making of" journey see: https://github.com/dwyl/elixir-auth-google/issues/25

The result looks better than the <img> button: 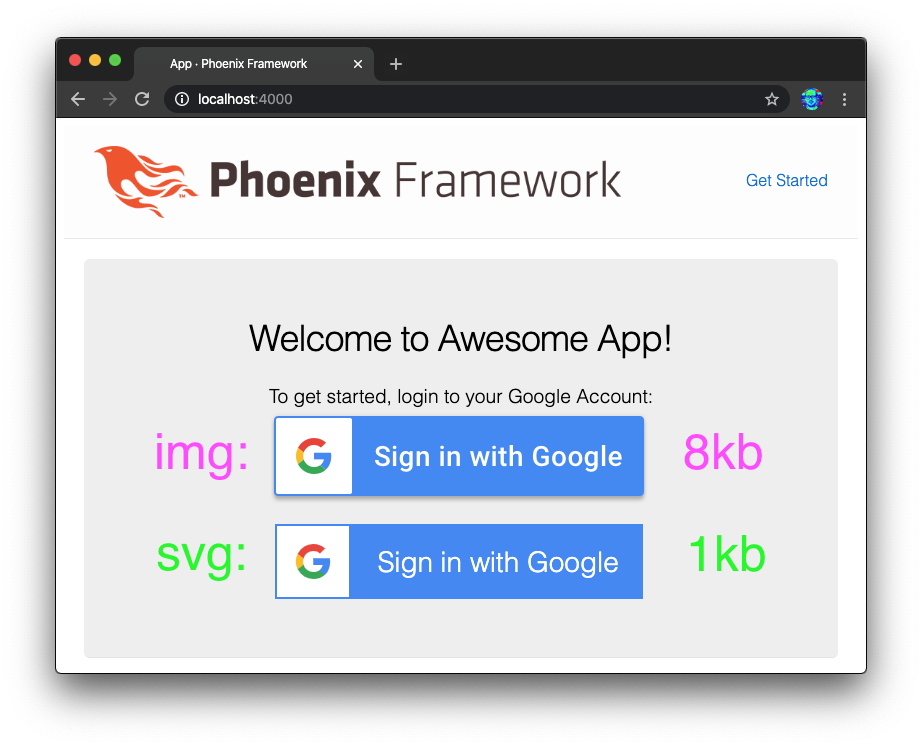 It can be scaled to any screen size so it will always look great! Using http://bytesizematters.com we see that our SVG+CSS button is only 1kb: 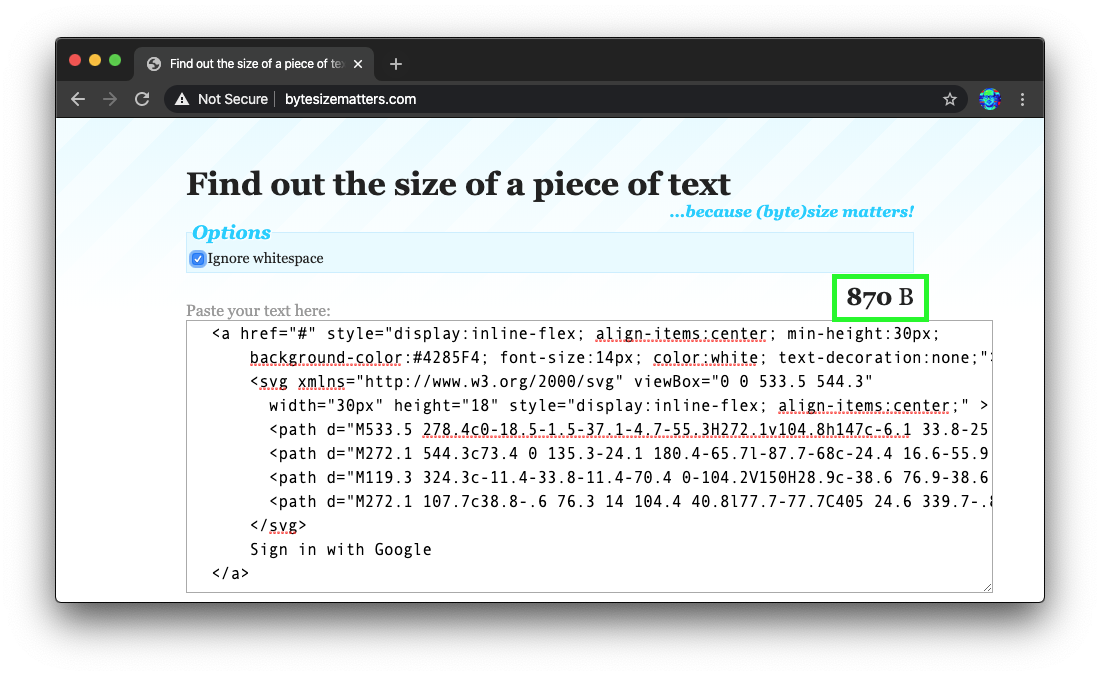 That is an 87.5% bandwidth saving on the 8kb of the .png button. And what's more it reduces the number of HTTP requests which means the page loads even faster.

This is used in the Demo app: lib/app_web/templates/page/index.html.eex

The biggest advantage of having an SVG+CSS button is that you can translate the button text! Since the text/copy of the button is now just text in standard HTML, the user's web browser can automatically translate it! e.g: French 🇬🇧 > 🇫🇷 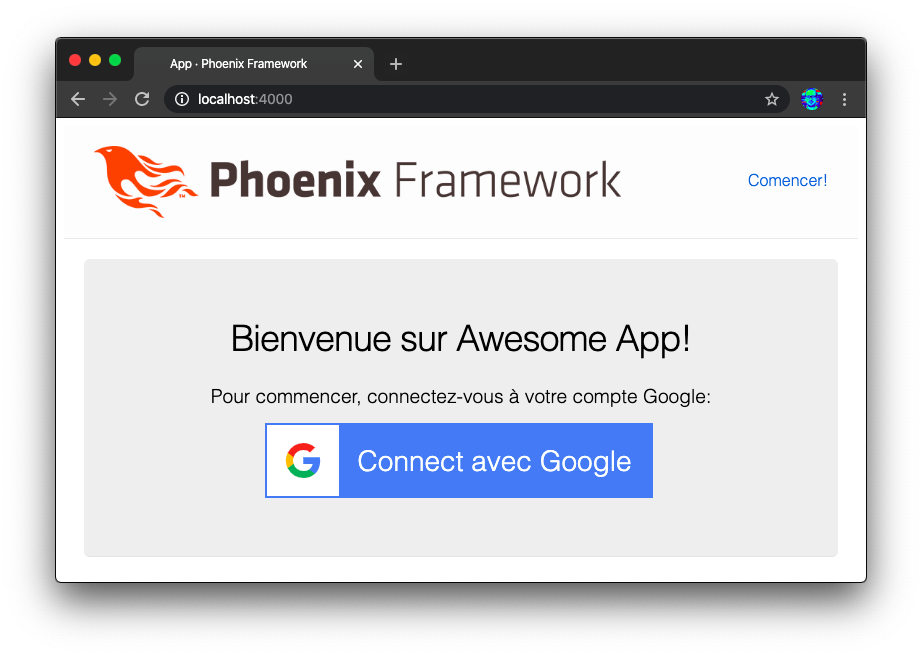 This is much better UX for the 80% of people in the world who do not speak English fluently. The single biggest engine for growth in startup companies is translating their user interface into more languages. Obviously don't focus on translations while you're building your MVP, but if it's no extra work to use this SVG+CSS button and it means the person's web browser can automatically localise your App!

The SVG+CSS button is more accessible than the image. Even thought the <img> had an alt attribute which is a lot better than nothing, the SVG+CSS button can be re-interpreted by a non-screen device and more easily transformed.

If you want to dive a bit deeper into understanding how this package works, You can read and grok the code in under 10 minutes: /lib/elixir_auth_google.ex

And if you want/need a more complete real-world example including creating sessions and saving profile data to a database, take a look at our MVP: https://github.com/dwyl/app-mvp-phoenix

Unlike other "social media" companies, Google/Alphabet does not report it's Monthly Active Users (MAUs) or Daily Active Users (DAUs) however they do release stats in drips in their Google IO or YouTube events. The following is a quick list of facts that make adding Google Auth to your App a compelling business case:

Of the 4.5 billion internet users (58% of the world population), around 3.2 billion (72%) have a Google account. 90%+ of tech "early adopters" use Google Apps which means that adding Google OAuth Sign-in is the logical choice for most Apps.

A common misconception is that adding Google Auth Sign-in sends a user's application data to Google. This is false and App developers have 100% control over what data is sent to (stored by) Google. An App can use Google Auth to authenticate a person (identify them and get read-only access to their personal details like first name and email address) without sending any data to Google. Yes, it will mean that Google "knows" that the person is using your App, but it will not give Google any insight into how they are using it or what types of data they are storing in the App. Privacy is maintained. So if you use the @dwyl app to plan your wedding or next holiday, Google will not have any of that data and will not serve any annoying ads based on your project/plans.